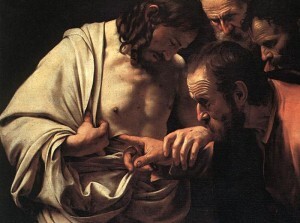 Some claim that Jesus didn’t die but simply passed out on the cross (see Did Jesus Rise or Swoon?). Still others argue that the resurrection is myth.

This post will focus on another common objection to the resurrection: the disciples hallucinated the risen Lord.

There theory has some serious issues, however.

While this is one of the more common theories that circulates regarding Jesus’ resurrection, it’s also one of the most strongly refuted ones. Here’s why:

First, Scripture tells us that the disciples not only saw Jesus but that they touched him. This indicates that he had flesh and bones. It also shows that their experiences of him were more than visionary – they were also physical.

Second, there are several accounts on which Jesus ate and spoke with them for extended periods of time. Again, this attests to the physicalness of Jesus. Furthermore, hallucinations are typically short in nature. The amount of time the disciples spent with Jesus does not fit the typical characteristics of a hallucination experience.

Third, Jesus appeared to some individuals more than one time. Are we to believe that these individuals hallucinated every encounter they had with him?

Finally, and perhaps most damaging to the theory, is the fact that a mass hallucination has never been recorded to happen at any other time in history. Hallucinations are characteristically experienced by an individual who’s sick or under the influence of a drug. There is no way of proving that as many as 500 people were sick or under the influence of a substance at the time they claim to have seen Jesus.

In this short video William Lane Craig explains why the hallucination hypothesis of the resurrection is implausible:

Also see:
The Resurrection Factor 1 of 5 (video)
Is Jesus Relevant Today?
Is the Bible Reliable?