Resist the enemy. The who? Scripture is unabashed in describing what we’re up against as Christians. 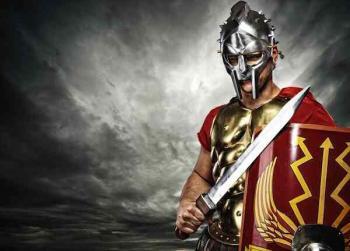 Ephesian 6:10-12 says, “Finally, be strong in the Lord and in his mighty power. Put on the full armor of God, so that you can take your stand against the devil’s schemes. For our struggle is not against flesh and blood, but against the rulers, against the authorities, against the powers of this dark world and against the spiritual forces of evil in the heavenly realms.”

Additionally, 1 Peter 5:8-9 says, “Be alert and of sober mind. Your enemy the devil prowls around like a roaring lion looking for someone to devour. Resist him, standing firm in the faith…”

Throughout the gospels Jesus can often be found confronting demons (also called evil spirits) and even being tempted by the devil (Satan) (Luke 4).

It is clear from the Bible that Satan is an intelligent, cunning enemy and one who would easily defeat us were it not for the mighty power of the Lord. He is often described as having schemes or plans and is strategic in his tempting. Luke 4:13 assumes this when it concludes the description of Jesus’ temptation: “When the devil had finished all this tempting, he left him until an opportune time.”

We have two other enemies as well: the influence of surrounding cultures (called “the world” in scripture) and ourselves—specifically habits, desires, priorities, and expectations that are contrary to what Jesus desires for our lives. That enemy is what scripture calls “the flesh” or “the old self.”

So as Christians, we are pressured to turn from following Jesus by three sources, Satan (and his demons), the world around us, and the old self within us.

Whew. So all we have to do is just resist and trust God, right?

Well, not so much. “Just trust God” has often been the Band-Aid advice well-meaning Christians give to those dealing with major struggles. The problem is not actually with the advice but with the assumption that applying that advice should be easy.

When we come up against seemingly insurmountable temptations, our intent to trust God quickly crumbles. It is a story sadly repeated throughout the history of God’s people. From the first pages of scripture with the temptation of Adam and Eve (Genesis 3), to Israelite’s depressingly fast slide into idolatry (Exodus 32), to the decades of wavering between idols and God (1 & 2 Kings), God’s people have always struggled to depend only on God.

It’s the same for us today. We easily scramble to meet our own needs, seek fulfillment, and pursue contentment without the slightest thought about depending on God to provide for us. It is no wonder, then, that we also easily find ourselves stuck in sinful habits, surrounded by voices that blame and condemn us, seeking escape and solace by whatever is closest at hand.

So what has to change to begin seeing victory over the world, the flesh, and the devil?

First, and deepest, is Resisting False Identity and learning to embrace our true identity as one fully known and fully loved.

Second, is Resisting Isolation and depending on God’s community—risking vulnerability with our brothers and sisters in Jesus.

And finally, Resisting Temptation and depending on God as we actually do the work and practices of resistance.

We are told in John 16:33 the Christian life is not going to be easy “I have told you these things, so that in me you may have peace. In this world you will have trouble. But take heart! I have overcome the world.” Our lives involve the juxtaposition of peace and trouble. Christ’s peace and ultimate victory over the world doesn’t mean the absence of trouble. His presence instead allows us to have courage and hope. Courage, that God will provide for us in the midst of this sweaty, dangerous task of resistance, and hope that our God-sustained resistance will ultimately bring freedom and victory!

Knowing Jesus personally as your Savior is the basis for experiencing God’s love and forgiveness. END_OF_DOCUMENT_TOKEN_TO_BE_REPLACED

The only way to live the vibrant and abundant life that God has for each one of us is to allow Him to direct us through the Holy Spirit. END_OF_DOCUMENT_TOKEN_TO_BE_REPLACED

Christ offers us a vibrant life full of purpose and adventure if we walk daily in the power of the Holy Spirit. END_OF_DOCUMENT_TOKEN_TO_BE_REPLACED

Is the Church a building? A Pastor? The Staff? The Music? They are all good things, but they are not the church. END_OF_DOCUMENT_TOKEN_TO_BE_REPLACED