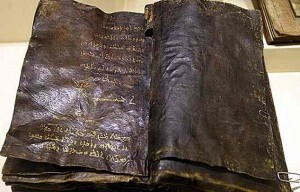 Does a “secret Bible” discovered in a Turkish smuggling sting contain the real truth about the identity of Jesus Christ?

According to a Turkish official, a 1,500-year-old ancient leather-bound text, secretly hidden for 12 years, could be an authentic version of the Gospel of Barnabas.

According to this “secret Bible,” Barnabas was one of Jesus’ original twelve apostles. However, in the book of Acts, Luke introduces Barnabas as an apostle who came after the original twelve, and was a fellow missionary with the apostle Paul. In their travels, Paul and Barnabas boldly declared Jesus’ death, resurrection and lordship in the first century.[1]

Let’s look at what the Gospel of Barnabas says about Jesus’ deity.

“I confess before heaven, and call to witness everything that dwells upon the earth, that I am a stranger to all that men have said of me, to wit, that I am more than man. For I am a man, born of a woman, subject to the judgment of God; that live here like as other men, subject to the common miseries.”[2]

Clearly the Gospel of Barnabas depicts Jesus denying his deity, whereas the apostle John clearly writes of Jesus as God the Son, Creator of the world:

Continue reading page 2 of 7 about “The Gospel of Barnabas: Secret Bible?”

The Bible as Evidence

Is the Bible the word of God or just a story? Dan Kimball examines the historicity of the Bible and whether or not it’s reliable or even relevant. END_OF_DOCUMENT_TOKEN_TO_BE_REPLACED

Is The Bible Bogus? by Lee Strobel

Lee examines the evidence about whether the Bible is trustworthy. END_OF_DOCUMENT_TOKEN_TO_BE_REPLACED

Is the Bible reliable? Eric Metaxas explores some of the ways we can know that today’s version of the Bible is legit. END_OF_DOCUMENT_TOKEN_TO_BE_REPLACED

Is The Bible Accurate by Josh McDowell