Truth demands action. When we are exposed to truth, it solicits a response — either application or evasion.

Romans 1 illustrates several principles about how to respond to God when He reveals truth to us.

The wrath of God is being revealed from heaven against all the godlessness and wickedness of men who suppress the truth by their wickedness, since what may be known about God is plain to them, because God has made it plain to them. For since the creation of the world God’s invisible qualities—his eternal power and divine nature—have been clearly seen, being understood from what has been made, so that men are without excuse.

For although they knew God, they neither glorified Him as God nor gave thanks to Him, but their thinking became futile and their foolish hearts were darkened. Although they claimed to be wise, they became fools and exchanged the glory of the immortal God for images made to look like mortal man and birds and animals and reptiles.

Therefore God gave them over in the sinful desires of their hearts to sexual impurity for the degrading of their bodies with one another. They exchanged the truth of God for a lie, and worshiped and served created things rather than the Creator—who is for ever praised. Amen.

Because of this, God gave them over to shameful lusts. Even their women exchanged natural relations for unnatural one… Men committed indecent acts with other men, and received in themselves the due penalty for their perversion.

Furthermore, since they did not think it worth while to retain the knowledge of God, He gave them over to a depraved mind, to do what ought not to be done. They have become filled with every kind of wickedness, evil, greed and depravity… Although they know God’s righteous decree that those who do such things deserve death, they not only continue to do these very things but also approve of those who practice them. (Romans 1:18-32, NIV, emphasis added)

Consider the portions of this passage that reveal principles about applying truth and what God does when His truth is ignored.

God made the truth about Himself understandable.

They did not apply this revealed truth.
• By glorifying Him as God
• By giving thanks to Him

Instead, they abandoned God.
• Their thinking became futile (senseless)
• Their foolish hearts were darkened
• They became fools who believed they were wise
• They exchanged the reality of a magnificent God for man-made substitute gods

This process is summarized in the Truth Cycle diagram: 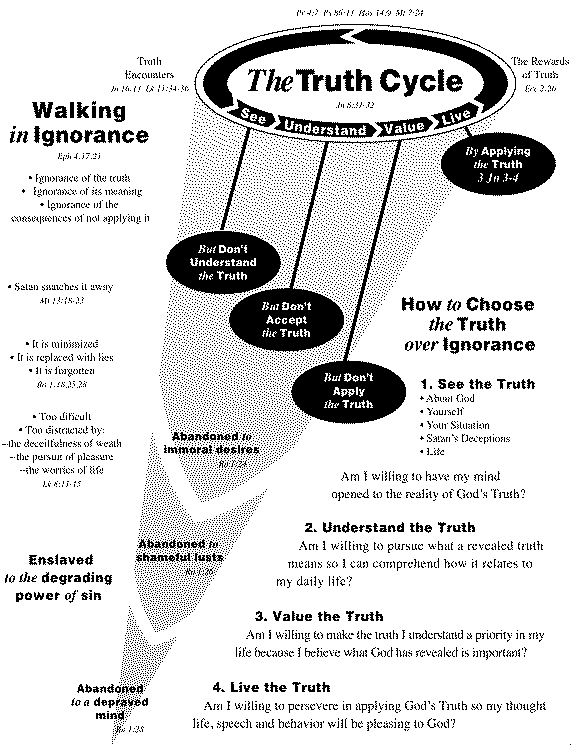 There are four key questions that reveal our heart attitude toward God’s truth:

Ask God to open your heart and mind to His truth, and to give you perseverance in choosing truth in every aspect of your life!

Knowing Jesus personally as your Savior is the basis for experiencing God’s love and forgiveness. END_OF_DOCUMENT_TOKEN_TO_BE_REPLACED

The only way to live the vibrant and abundant life that God has for each one of us is to allow Him to direct us through the Holy Spirit. END_OF_DOCUMENT_TOKEN_TO_BE_REPLACED

Christ offers us a vibrant life full of purpose and adventure if we walk daily in the power of the Holy Spirit. END_OF_DOCUMENT_TOKEN_TO_BE_REPLACED

Is the Church a building? A Pastor? The Staff? The Music? They are all good things, but they are not the church. END_OF_DOCUMENT_TOKEN_TO_BE_REPLACED