“If your brother or sister sins against you, rebuke them; and if they repent, forgive them. Even if they sin against you seven times in a day and seven times come back to you saying ‘I repent,’ you must forgive them.” The apostles said to the Lord, “Increase our faith!” Luke 17:3-5 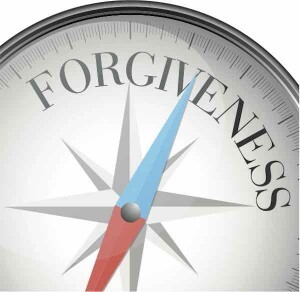 Most of us are probably like the apostles in the Luke passage above. In hearing that we must forgive someone for the same thing seven times in a day (really this means an infinite number of times) the apostles and many of us respond, “Lord, increase our faith!” In other words, “What are you, crazy??? That’s impossible!” True. Forgiveness doesn’t make a lot of sense.

With these words Jesus set a high standard. His life set an even higher standard. While hanging from nails pounded through his body, in physical agony, betrayed and humiliated, Jesus looked at those responsible and prayed, “Father, forgive them, for they do not know what they are doing.” (Luke 23:34)

So what did his executioners do to merit forgiveness? Was there a sudden change of heart, tearful apologies, demonstrated difference in life choices? They didn’t deserve to be forgiven. And that’s the funny thing about forgiveness, it isn’t and can’t be deserved. So when each of us hears the good news of the gospel that says “You, ______ (fill in your name), are forgiven. Everything you’ve ever done, are doing, or will do is forgiven.” It has nothing to do with your worthiness of being forgiven.

Jesus is pointed in his application of this truth: we do not have a corner on the forgiveness market. As we have been forgiven so we should forgive—extravagantly, without waiting for change in the other, forgiveness as a gift, not as a response, but initiated by the offended.[1]

21 Then Peter came to Jesus and asked, “Lord, how many times shall I forgive my brother or sister who sins against me? Up to seven times?”

22 Jesus answered, “I tell you, not seven times, but seventy-seven times.

23 “Therefore, the kingdom of heaven is like a king who wanted to settle accounts with his servants. 24 As he began the settlement, a man who owed him ten thousand bags of gold was brought to him. 25 Since he was not able to pay, the master ordered that he and his wife and his children and all that he had be sold to repay the debt.

26 “At this the servant fell on his knees before him. ‘Be patient with me,’ he begged, ‘and I will pay back everything.’ 27 The servant’s master took pity on him, canceled the debt and let him go.

28 “But when that servant went out, he found one of his fellow servants who owed him a hundred silver coins. He grabbed him and began to choke him. ‘Pay back what you owe me!’ he demanded.

29 “His fellow servant fell to his knees and begged him, ‘Be patient with me, and I will pay it back.’

30 “But he refused. Instead, he went off and had the man thrown into prison until he could pay the debt. 31 When the other servants saw what had happened, they were outraged and went and told their master everything that had happened.

32 “Then the master called the servant in. ‘You wicked servant,’ he said, ‘I canceled all that debt of yours because you begged me to. 33 Shouldn’t you have had mercy on your fellow servant just as I had on you?’ 34 In anger his master handed him over to the jailers to be tortured, until he should pay back all he owed.

35 “This is how my heavenly Father will treat each of you unless you forgive your brother or sister from your heart.”

Ephesians 4:32
Be kind and compassionate to one another, forgiving each other, just as in Christ God forgave you.

Colossians 3:13
Bear with each other and forgive one another if any of you has a grievance against someone. Forgive as the Lord forgave you.

How then do we forgive so generously? Is forgiveness an intellectual act? Do the emotions associated with being hurt or sinned against simply disappear if we decide to forgive?

Forgiving another person can lead us toward emotional healing, increase our experience of peace and contentment, and lessen our anger and pain. “But emotional healing is not the main purpose of forgiveness…the heart of forgiveness is a generous release of a genuine debt…that’s a gift we give not so much to ourselves but to the one who has wronged us.”[2]

So forgiveness is an action of love, done for the sake of another. It is an action that is prompted when we receive God’s forgiveness for our own sins and motivated by God’s crazy love in us that allows us to love our enemies (even if they remain our enemies).

Think of someone who has wronged you. Use the prompts below as one possible way to pursue forgiving them. Repeat throughout the rest of your life.

Regardless of their reaction, if the person you’ve forgiven is someone with whom you have ongoing interactions, your next job is to assure them that the gift of forgiveness you gave them really was free—through treating them with respect and warmth (not trying to subtly punish them with coldness), serving them humbly (reinforcing that you don’t think they owe you anything), and even verbally affirming them (not giving guilt the silence it needs to fester).

Knowing Jesus personally as your Savior is the basis for experiencing God’s love and forgiveness. END_OF_DOCUMENT_TOKEN_TO_BE_REPLACED

The only way to live the vibrant and abundant life that God has for each one of us is to allow Him to direct us through the Holy Spirit. END_OF_DOCUMENT_TOKEN_TO_BE_REPLACED

Christ offers us a vibrant life full of purpose and adventure if we walk daily in the power of the Holy Spirit. END_OF_DOCUMENT_TOKEN_TO_BE_REPLACED

Is the Church a building? A Pastor? The Staff? The Music? They are all good things, but they are not the church. END_OF_DOCUMENT_TOKEN_TO_BE_REPLACED