We are in the second part of this series called “Starting Over” and the subtitle is “How to ensure next time won’t be like the last time.”  I am going to talk about three processes that you have to engage with to make sure that next time is better than last time.  The three go like this, own it, rethink it and release it.  Today we are talking about “own it.”

Here are some highlights from Part 2 of Starting Over from Andy Stanley.

In order for you to ensure that your negative history doesn’t repeat itself, you have to own your role in your negative history.  You have to pause long enough to actually own your responsibility on what was your fault.  Own that you are part of the disaster, whether it was professionally, romantically, relationally, academically, or whatever it might be.  Now the reason we don’t do this is because (let’s face it) there’s nothing to own, it wasn’t your fault.  There’s something in you and something in me that says, you know, there’s a better story to tell and I don’t want to tell a story about how I screwed up.  I’d rather tell a story about how unfair they were and how dishonest they were and how they always kept me off balance.  I don’t want to talk about me, I want to talk about them.   Your best bet for a successful future is to own your share of your past.  If you’re part of the human race it is in you to blame other people, and to blame circumstances and to blame somebody else.  It is in you to just ignore your part and to get so enamored with your story that people cry, write checks and offer you jobs.  We don’t stop long enough to ask the question, what was my part?  God said to Adam and Eve in Genesis there is just one rule.  See that tree over there, don’t eat from the fruit of that tree.  But then they broke the one rule and here’s what Scripture teaches, that when they broke this rule, you got messed up, and I got messed up and sin entered the world.   When they heard the sound of the Lord God as he was walking in the garden they hid.  When we do something wrong we hide from people around us because of guilt and shame.  Adam and Eve hid from God and so he asked them have you eaten from the tree that I commanded you not to eat from?  The very first thing the first two people in the world did after they sinned was blame somebody else.  We all want to tell a story that’s mostly true, we just don’t tell the whole truth.  After you tell your story that’s 90 percent of the truth long enough, you start to believe it’s the whole story and you hide.  If you don’t own your part of your own history you will lay the groundwork for undermining your own future.  If you don’t pause and take responsibility for your part in your history, the part of your history that’s caused you to have to start over, you will drag it with you into your future.  You cannot blame your way into a better future.  Blame enables us to smuggle our issues into our future.  Blame allows you to smuggle your dysfunction, your habit, your poor relationship skills, your poor decision making skills, your family issues, your stuff into your own future.  That’s why it’s deadly, that’s why you just can’t do it.  That’s why before you start over you’ve got to stop and ask some really difficult questions.  What was my part and you have to own it.  When you own your part of the past you gain clarity.

There’s a relationship between purity and clarity.  The purer your heart is, the cleaner your heart is, the more work you’ve done to clean out the junk. To get rid of the stuff you’re hiding, that you’ve never owned up to and are afraid to admit, my part, I can’t stay as mad.  I can’t stay as angry about their part and you begin to see clearly and you’ll make better decisions.  Blessed are the pure in heart for they shall see God.  As long as there’s something that you’re hiding, as long as there’s impurity in your thinking or your past, you lack the clarity you need to ensure that next time is better than last time.  At 20 minutes into the sermon Andy invites you to go home and draw a circle that represents the sphere of blame and put in it everything that contributed to the fact that you got to start over.  This is huge to make peace with your past, to move on without your past dragging you down.  To make peace with your past by owning your piece of your past.   I kept telling myself I could handle this but the truth is it was handling me.  It’s embarrassing, emotional, difficult and I’ll warn you it’s going to take energy out of your story, but you’re going to gain clarity you’ve never had before about your own future.  So, if next time is going to be better than the last time, then you got to own your part of what went wrong.  As you write it down you will think of something else and the more you write the clearer you’re going to see.  Your story is going to begin to lose its energy but you are preparing for the next time around.  Don’t smuggle the past into the future, own it. 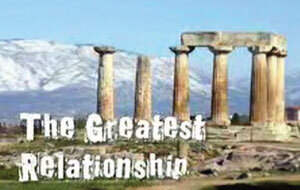