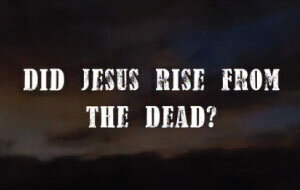 Did Jesus Rise From The Dead?

A professor from the University of California at Berkeley gathered a group of scientists and philosophers to try to explain the mystery of life’s origin. Did we come to exist by chance or is there something else going on? Each person at this meeting held significant doubts about evolutionary theory. “Is there a purpose, a plan or design based on intelligent cause? …that is the fundamental question.”
(Watch this video)

In 1832 Darwin made a 5 year expedition for the British government. He spent a month on the Galapagos Islands and collected species and took extensive notes. Twenty years later, he published, “On the Origin of Species.” The idea of natural selection made it so the idea of a “designer” of species was obsolete. “However, a growing number of scientists were having trouble accepting the idea of natural selection in all cases.” (Watch the video)

Dr. Michael Behe looks deeper at the process of natural selection and discovers Darwinian explanations do not provide sufficient answers for life. One example in molecular biology, the “flagellar motor,” when magnified over 50,000 times could be described as the most efficiently designed machine. In the next chapter a principal which refutes Darwinian thought is the idea of “irreducible complexity.”
(Watch the video)

Dr. Behe’s published book, “Darwin’s Black Box” describes evidence of intelligent design. “The assemblage of the ‘flagellar motor’ is an example of irreducible complexity all the way down.” Darwin is quoted that his theory would break down if any such irreducibly complex organism existed. The next chapter looks deeper at such questions. (Watch this video)

This chapter uses computer animation to take us inside the workings of a cell, through each step of its intricate processing. Dr. Kenyon states, “This is absolutely mind boggling to perceive at this scale and size such a finely tuned apparatus, a device that bears the marks of intelligent design and manufacturing. In DNA we find the most compelling evidence of design in the whole earth.” (Watch this video)

We can’t prove or disprove the existence of God. How can we even know if there is a God? END_OF_DOCUMENT_TOKEN_TO_BE_REPLACED

In 1955, Professor Antony Flew set the agenda for modern atheism with his Theology and Falsification, a paper presented in a debate with C.S. Lewis. END_OF_DOCUMENT_TOKEN_TO_BE_REPLACED

Does science point to the existence of a creator? John Burke examines the scientific evidence that suggests we are the product of intelligent design. END_OF_DOCUMENT_TOKEN_TO_BE_REPLACED

Belief in God, as Professor Kreeft shows, is more rational than belief in nothing. Logic, science, and reason, support God. END_OF_DOCUMENT_TOKEN_TO_BE_REPLACED